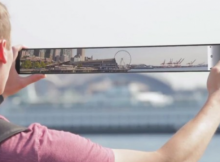 The iPhone 6s and iPhone 6s Plus has just launched in market and people are already speculating the design and upgrade that might be implemented in the upcoming Apple iPhone 7. If speculations are to be believed, iPhone 7 might hit the market on September 2016.
The new iPhone 7 is expected to have two different models with a 4.7-inch termed as iPhone 7 and a 5.5-inch model called the iPhone 7s. Also, the team is expected to bring about a whole new change in the physical model causing a complete remodel of the existing iPhone design. According to Mac World, there is also a possibility that iPhone models might possess better battery life, compared to that of its older models; however, Jony Ive has commented on the following factor that this possibility need not be given huge importance as most of the Apple models have greater battery life.

Unlike previous models, the upcoming iPhone 7 and 7s might have a sleek and thinner design, Tech Advisor reported. The team has applied patent for a slim headphone plug, which confirms that the new design could be thinner than the usual models. Going a step ahead, the much awaited Apple iPhone 7 and 7s might also offer huge built-in storage capacity plus a possibility that Apple will offer its consumers with wireless charging.
As a whole, since team Apple has been successful in gaining customer attention even before unveiling a product, if all the speculations and rumors sound to be true, then iPhone 7 and 7s is going to create yet another revolution in the smartphone world.