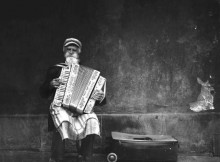 From thousands of entries, the judges at IPPAwards select the top three photographers of the year and finalists in 19 categories

The iPhone Photography Awards, an international photography contest that fosters iPhone and mobile photography, has announced the winners of its eighth annual competition, with Michał Koralewski of Poland coming on top, and David Craik of the United Kingdom and American Yvonne Lu following the second and third spots respectively.

“It’s an incredible surprise for me to be given this award,” Koralewski tells TIME. “I’ve taken part in the IPPAwards contests for three years, and this is the first time I won something more than an honorable mention.”

Reviewing thousands of entries from all over the world, the jury selected the top three, as well as three winners in each of the 19 categories, which included travel, architecture, food and portrait. “This year’s entries were especially impressive ranging from intimate, thought-provoking moments to stunning, captivating imagery,” says the awards’ founder Kenan Aktulun.

Koralewski won best Photographer of the Year with the shoot Sounds of the Old Town, which depicts an elder accordionist playing traditional Polish songs in the market square of Warsaw. He captured the dreamy scene with an iPhone 5 equipped with a COVR photo lens – a sliding camera lens that allows photos to be taken discreetly from the waist.

As an amateur photographer, Koralewski enjoys the portability and low-profile nature of the device: “I have it with me all the time. It’s fast and always ready to use so I almost never miss the fleeting moment,” he says. “It allows me to stay almost invisible to the neighborhood when shooting.”

Craik won second prize with Cafe Birds, an image taken with his iPhone 5s in a café in Dorset, a fishing town in South England. “I’m overjoyed because I’ve finally won some recognition with a wildlife photo, and with an iPhone photo as well,” he says.

A self-taught photographer, Craik admits his “gut-wrenching passion” for wildlife inspired his shot. “I saw the birds, I saw the shadows on the wall, and I saw the corner of the table,” he says recalling the moment he noticed starlings reaching for crumbs on his table. “I saw this image happen in front of me.”

Craik applied minor edits to the photo using Pixlr to lighten it up. Although photo-editing apps were allowed in the contest, laptop post-production programs such as Photoshop were not.

With Before Sunset, an intimate photograph of a sleeping couple traveling by train along the Hudson River, photographer Yi-Chieh Lu – who goes by Yvonne – won third place. A fine art professional photographer, Lu relies on her phone mostly for street photography, as she values the “real-eye point-of-view” it provides, and praises the ability to share shots quickly on social media to reach a broad audience. Lu used VSCOcam to enhance her photograph.

Founded in 2007, the same year the iPhone was launched, the IPPAwards celebrates the power of the mobile device to produce valuable visual work.

The three winners learned to hone their skills through practice: “If you want to take a good photograph, first you need to cut out distractions in the background and focus on the essential parts of the frame. It’s especially important if you take photos with a smartphone,” says Koralewski who also encourages attention to light and experimenting with different angles for varying perspectives. The key is to be patient and to refrain from the natural instinct to rush, which might lead to blurry outcomes, Craik suggests while Lu reminds photographers to always have their iPhones with them. “Take your phone with you all the time, don’t put it in the bag!” suggests Lu. “That way, you can always capture beautiful moments just with your phone in hand.”